The release of Arma 3 Apex marks the grand finale of our 2015-16 roadmap: an expression of all the hard work our team and splendid community has poured into the development over the past few years, and a rich experience of combined arms warfare for new and veteran players alike.

Let’s take a quick look back at some of the most splendid additions and enhancements we've rolled out since our original launch, pick out a handful of our favourite new Apex features and content, and round off with a brief look ahead to the next phase of Arma 3's life.

In March 2014, Update 1.14 introduced the final East Wind campaign episode alongside two free jets. Suffice to say, over two years (and 37 updates) later, it's impossible to pay tribute to the staggering progress made. My (very selective) highlights include a mix of innovative design and meaningful platform enhancements.

End Game, an MP mode introduced with Marksmen DLC, provided us with a tangible focus to introduce new systems, diagnostics, and network optimisations. No matter the kind of multiplayer you enjoy, performance, stability and security has made progress. Besides that, End Game Tournament resulted in a bit of fun, too!

Aside from new Premium Content, our DLC strategy has introduced a slew of meaningful gameplay mechanics. For example, the ability to Fire From Vehicles added a new dimension to traversing our large terrains, while Weapon Deployment was the final piece of the puzzle for a significant overhaul of weapon handling.

The Launcher unlocked a new way to kick-start the game; it's grown to offer mod-management, server-browsing and more. Plus, with improvements to our audio engine, together with improved quality of samples, and cast in splendid new lighting of the Visual Update, Arma 3 looks and sounds like a new game.

With Apex, our ultimate goal is to create new experiences for our diverse playerbase. We've focused upon updating the platform with a suite of enhancements / additions for everybody, and re-invigorating the game with interesting new Premium Content, including Tanoa, new classes of vehicles / weapons, and an MP campaign.

Its diversity starts with the very structure of the terrain: multiple islands offering some interesting new challenges and opportunities. Its history contributes to a variety of settlements. From hidden tribal ruins, through postcolonial Francophone villages, to modern industry, Tanoa just begs to be explored, hiding a surprise around every corner.

Within the given scope of the project, we chose to focus upon expanding the types of gameplay Arma 3’s official content has to offer. Distinctive new classes, like the VTOLs and LSVs, support that goal; however, other cool additions, like the civilian plane and water scooter, play their part, too.

As for new weapons, thirteen in total, we recognised the benefit of adding some true classics to our official line-up of firearms, which also helped to diversify the factions a bit. Speaking of which, we also took the opportunity to add distinctive new NVGs, plus other headgear, uniforms, backpacks, etc. 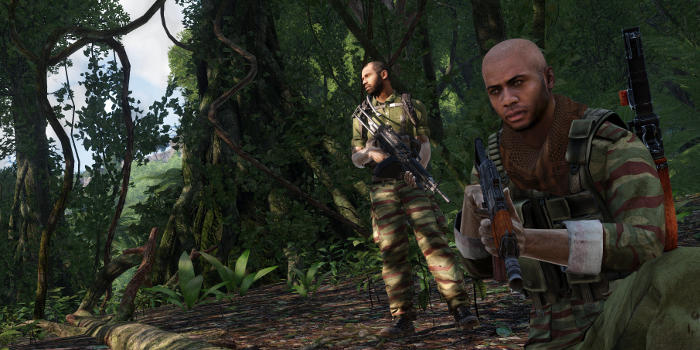 We had (although don’t ask our audio designers) a lot of fun adding distinctive French and Chinese identities, supported by new radio protocol, faces, factions and equipment. Again, an opportunity to achieve something fresh; it's a whole different combat experience hearing enemy chatter in the jungles of Tanoa!

Hand in hand with the Eden 3D Editor, a huge new array of assets and props are ready for content creators to set to purpose. At a lower level, detailed new models (and many other basic terrain building blocks) stand to benefit community-made terrains / modes for years to come

The co-op campaign follows Group-15, a CTRG team deployed to Tanoa to help face down a criminal enterprise. Like Zeus DLC, Bootcamp's Prologue, and the East Wind SP campaign before that, it offers a different perspective on combat: a teamplay-oriented gateway to the scope / complexity Arma has always offered.

As a focused introduction to cooperative gameplay, it's a fine place to experiment with friends, put squad tactics to the test, and get a flavour of what Tanoa has to offer over the course of seven linked missions (which scale in challenge depending on the number of players taking part).

Alongside the above 'Premium Content', we're also proud to share a select few enhancements made to what we call 'the platform'; essentially, changes to the underlying game that everyone who owns Arma 3 automatically receives for free. Although we've already covered a few highlights, Apex introduces several more noteworthy additions.

Rounding down a few 'rough edges' has long been a goal. Apex introduces a new Main Menu, built upon distinctive vignettes of our terrains; it presents a more consistent ‘first contact’, offering improved 'discoverability' of content, more manageable performance, and a truer sense of the unique atmosphere of our terrains.

Although a deeper ‘overhaul’ was out of scope, some modest improvements to interactions were achieved. 'Decluttering' the Action Menu was made possible, in part, by low-level control improvements (like configurable key-binds for weapon switching), and some promising foundation work related to ‘continuous actions’ (like reviving a team mate in MP). 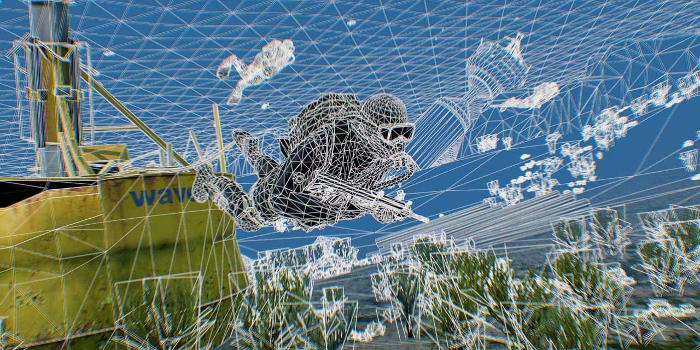 Ah, that wily old beast. Since launch - alongside a multitude of minor improvements (a frame here, a frame there, depending on context) - a few 'stand out' optimisations / new technologies have been deployed, such as Land Grid / Object Aggregation, Geometic Occluders, and improved Clutter / LOD management.

Together with network traffic improvements, better scripting practises, improved diagnostics, and additional community documentation, the refactoring / extension of our functions libraries, script commands and event handlers has improved the performance of official / custom scripted content alike. Naturally, there’s more to do. But Apex has endeavoured to push further.

Alongside the resolution of miscellaneous gameplay-related issues, a few things stand out. ‘Vehicle-in-Vehicle transport’ is a handy engine-implemented feature that enables new logistical options, like quickly moving an LSV in the belly of a VTOL (great for an island archipelago). It’s also something we’d like to refine more in future.

Apex was also a focus for the finalisation of multiplayer systems. For example, the UI/X-focused ‘Tasks Overhaul’, has enabled the indication of objectives assigned to other friendlies, plus a range of customisation options / optimisations. Revive, too, was greatly optimised; it continues to lead the way for further interaction improvements.

With Apex fresh out of the development oven, we’re still in a post-release maintenance / evaluation phase. Although our 2016-17 roadmap is shaping up, we’re not positioned to make bold proclamations just yet. That said, short term, improvements including Arma 3 Units, AI planning, plus samples / documentation are in-bound!

It’s also fair to say that we're actively listening to our community, and we value our combined arms military core / heritage. We've taken on board much of your detailed feedback, and have started to identify the kind of improvements that will make the Arma 3 experience even more appealing.

While on the subject, we'd also like to, once again, sincerely thank our community for all their continued support. At times, Arma 3’s development has been a wild ride, but watching the community grow, seeing some staggering mods develop, and cooperating with all the constructive feedback has been massively rewarding.

Ever since Arma 3's official release back in September 2013, the team has strove to deliver the maximum while maintaining - and raising - standards of quality. Arma 3 Apex is an investment of thousands upon thousands of hours of dedication from all involved. We plan to invest even more, experiment more, learn more - and we hope you’ll join us!