Arma has always asked a lot of its players. Yet, although it can be a challenge, the depth and diversity of Arma's gameplay has long been one of its greatest strengths. Unlocking that potential, though, is no simple matter; nevertheless, this is the main objective of the Arma 3 Bootcamp Update.

Below, we set out the ways we've sought to achieve this goal. Ahead of its release (and the impending development-branch staging), we want to introduce Bootcamp's new modes, sandbox content, and refined gameplay mechanics. We'd like to share our motivations and present the benefits to new and veteran players alike.

Month-on-month, since launching in September 2013, Arma 3 has continued to expand its installed and active player-base. Recently, we passed the 1m copies mark and shared our roadmap for the next two years. The Bootcamp Update, then, is part of a longer-term view, part of a platform that we hope will continue grow for many more years to come. It's also just one piece of our ongoing development. Worked on in parallel with the Helicopters and Marksmen DLCs, the Expansion, and continuous optimisation and stability updates, it's a small but significant part of our combined efforts.

Of course, Arma 3 Bootcamp's new content builds upon pre-existing scenarios and helpers, too. Our Showcases are bite-sized introductions to a variety of gameplay, while the (recently updated) Campaign offers progressively more responsibility, challenge and complexity. However, rather than focus upon adding 'traditional' tutorials (something akin to those in Arma 2: Operation Arrowhead), Bootcamp's content is characterised by its variation. It includes singleplayer, multiplayer and non-gameplay components, together unified under a new item main menu: Learn.

For new players, we hope that the singleplayer 'Bootcamp' campaign mode will be the best place to get started with Arma 3.

This tool offers an overview of the available content, and enables customised loadouts to be exported to script, which can be used in the editor, other game modes, such as Zeus, and by community scenarios/mods. 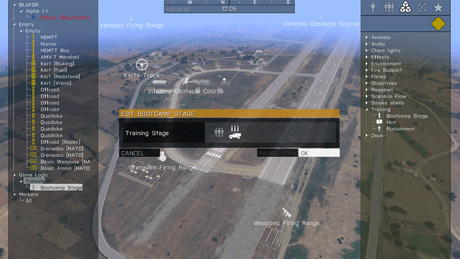 Creating and sharing new experiences with friends, multiplayer can be a great way to get into a new game. The immediacy of the gameplay can grasp the attention of uncertain players, and encourages learning through play. Equally, however, getting 'thrown in at the deep' end can be daunting. Bootcamp MP aims to provide official content that encourages veterans to teach newbies.

A specially crafted Zeus scenario offers a framework for more experienced players ('Instructors') to provide gameplay challenges to newer players ('Recruits'). Instructors, taking on the role of a 'Zeus' game master, teach Recruits with a set of predefined objectives. Recruits are led and supported by their Instructor as they fulfil the tasks given to them on-the-fly.

VR Training challenges players to learn about basic game mechanics through a variety of 'training topics', which focus upon individual aspects of gameplay. Within the confines of a virtual world stripped of extra details like vegetation, weather, and natural / urban objects, players are guided to complete simple objectives with the support of contextual hints and tips.

Three principles are central to its premise: simple tasks, instant restart, and progressive difficulty. At any point, recruits can ‘reset’, clearing and respawning the topic content. VR Topics themselves are short, focusing upon a specific action or principle. Each scenario has progressive ‘levels’, which increase in difficulty, reinforcing/adding depth to individual game mechanics. 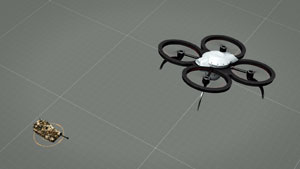 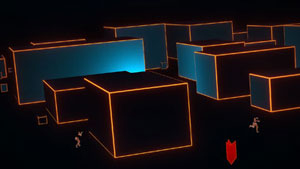 The VR Training concept is supported by a unique new 'world'. 'Virtual Reality' acts as a digital blank canvas, where 'real' game assets are spawned alongside 'simulated' entities to create artificial scenes that serve carefully designed purposes. In official content, this includes the above-described VR Training topics. More broadly, it acts as a terrain to test content or features under simple or highly specific conditions, and – we hope – as a space for content creators to try out more experimental and innovative concepts.

Virtual Reality also includes a set of related assets, such as the VR Goggles and training suit. Additionally, a set of 'generic' VR Objects (cubes, primitive structures, etc.) are available. These are plain geometric blocks in the daytime, with glowing edges in low-light conditions, which provide the 'building blocks' to populate scenes and, hopefully, encourage the creation of different types of game modes and new possibilities for custom scenarios. 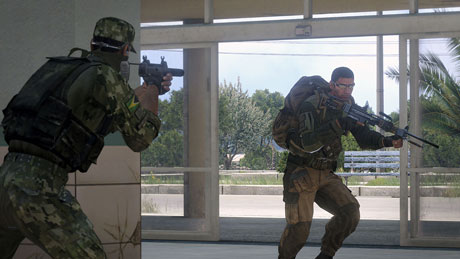 At present, the choice between pistols or submachine guns and more powerful rifles or automatic weapons is often quite simple: the bigger the gun, the better! Weapon Sway and Inertia is intended to simulate the inherent advantages that lighter and more compact firearms possess (particularly in CQB situations) as compared to relatively more cumbersome weapons. In short, this feature is intended to give players real choices about their loadout.

However, we also want to avoid arbitrarily limiting player rotation speed. While – in principle – it's logical to suggest that heavier weapons translate to slower turns, we think that this inherently fails to simulate natural compensation: physically adapting to different types of load. This can create a disconnect between players and their in-game avatars – a feeling of 'lag' in critical situations. Instead, we're looking at aim-precision penalties. Players may turn as quickly as they like, but shouldn't expect their sights to line up dead on target. 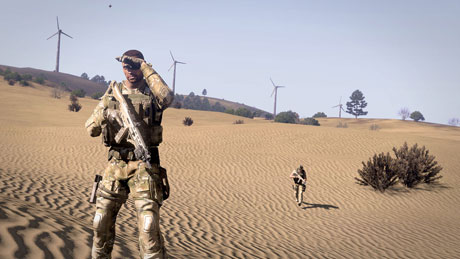 The link between fatigue mechanics and player movement can be improved in Arma 3. Our work aims to appropriately connect fatigue states – a product of encumbrance (total load) and exertion (movement rate) over time – to animation slowdown and Weapon Sway penalties. While players will always be able to 'run', their rate of movement can now be limited based on the weight of their gear, their state of health, and the management of their stamina.

This feature refinement is built around the idea of encouraging players to manage their equipment / stamina, and communicating the results of their choices clearly / consistently. Without arbitrary punishments, we want to produce an authentic mechanic; players should benefit from planning out their movements and thinking carefully about their equipment. We hope that – presented properly – this depth will promote meaningful and enjoyable gameplay, and encourage teamplay and communication – principles as the heart of Arma 3. 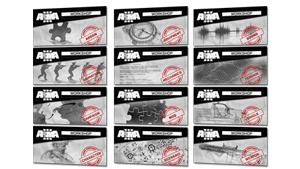 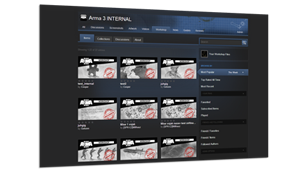 The Bootcamp Update also aims to significantly improve the experience of finding and playing with mods. Essentially, Workshop support for addons involves handling the discovery, installation and maintenance of all kinds of community content – vehicles, mechanics, total conversions, etc. – akin to the way custom scenarios are currently accessed via Steam. We're also set to publish the first iteration of our Game Launcher. Alongside useful basic functionality - such as command-line parameters - this separate executable helps to organise, maintain and load mods.

Our initial release is a starting point. In cooperation with our community, we aim to improve and expand upon these features. Targeting an ideal balance between solid usability and more advanced functionality – plus support for custom game launchers – we believe this work will encourage a wider audience discover great mods, provide new options to pre-existing community solutions, and benefit the Make Arma Not War contest, too.

Because we know that different kinds of players like to learn in different ways, we've approached Bootcamp's content with a fairly open mind. The result is a fairly diverse set of content and features. What binds these modes together is a sense of achievement: we want players to know that – although it may be different from other games – Arma is far from impenetrable. In fact, it's this very gameplay that brings players back for more! That's not to say we're complacent, though. While Arma 3 has made good progress in terms of rounding down some rough edges, that work can and will continue.

While preserving the unique spirit of our series, we'll continue to do more to help players by making more intuitive designs and promoting more fluid gameplay. Similarly, work on stability and optimisation continues. As set out in our new year blog, we'll carry on supporting, refining, and investing in Arma 3. We'll continue to try out new things, innovate, and learn. And, of course, we'll carry on working closely in splendid cooperation with our players. Hopefully, things like Bootcamp Update can help support and grow our community; ultimately, the continued development of the Arma 3 platform will sustain it.