Marking the midway point of our 2015-16 roadmap, Arma 3 Eden Update is an extraordinary free package of new and improved platform features. Built upon the foundation laid down by December’s Nexus Update, we think of Eden as an ambitious development springboard, which sets us on a splendid vector towards our ultimate goal - this summer’s expansion: Arma 3 Apex.

On the eve of Eden’s release, we’d like to examine its key features and discuss its relationship to our broader plans. We’ll kick off with an overview of the backbone of this update - the Eden 3D Scenario Editor - outline some fantastic improvements to the Arma 3 Launcher, and round-off with an introduction to your brand new battlefield soundscape.

Although rooted in the core simplicity of the classic editor, the Eden Editor constitutes a real leap forward for creators, built from the ground up to make scenario creation quicker and easier. But it’s never just been a tool for serious editing. Perhaps now more than ever, it’s a playful sandbox: throw down some units, click play, and jump in! 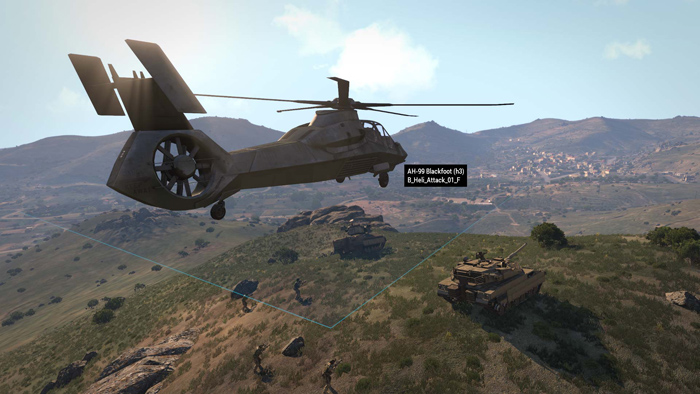 While the traditional top-down map view remains, the stand-out new feature is the ability to quickly build scenarios from within the 3D scene itself - invaluable for richly detailed compositions! 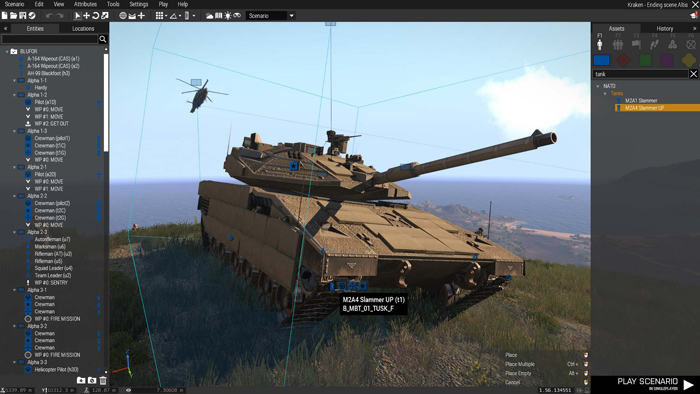 Arma 3’s a big game with an expansive (and expandable!) library of content. Now, using real-time search, finding that specific weapon, vehicle or object has become much more intuitive.

We first introduced our Launcher alongside 2014’s Bootcamp Update, and we've been pleased to see gradual improvements ever since. Now, another satisfying upgrade is ready, with the integration of a server browser, supported by useful new features and mod support. Arma 3's multiplayer community is rich and diverse; our aim is to make finding and joining games easier than ever. 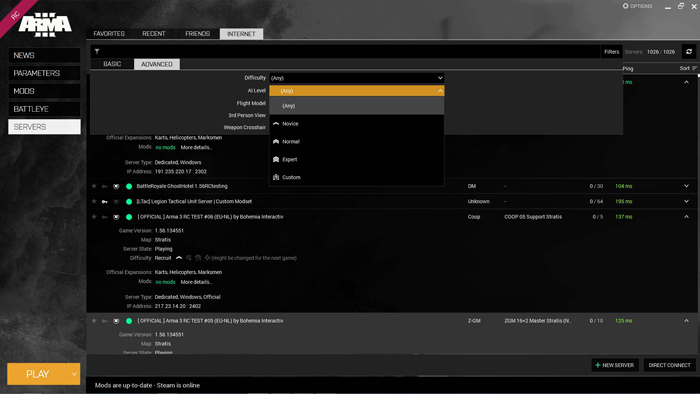 New and more usable filters are a big plus. Basic options are complimented by advanced search criteria, which enables players to find multiplayer games more closely suited to their preferences. 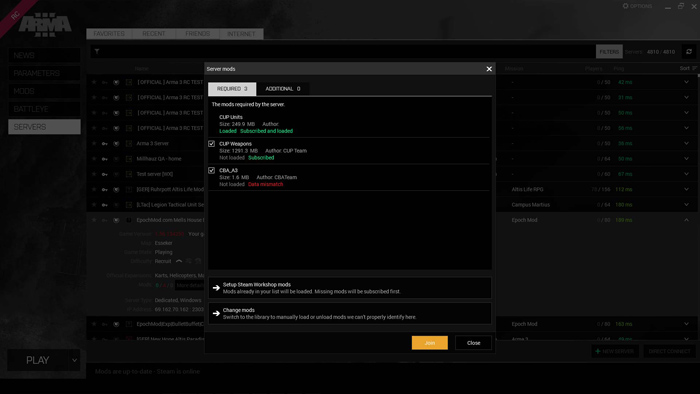 Some servers require the installation of Steam Workshop content. The Launcher’s server browser helps to simplify this process, checking for required / missing mods, and offering players an automatic download.

With Helicopters and Marksmen DLC, we made gradual progress refactoring our audio engine, but with Eden Update, we set out to truly enrich the soundscape. A new approach to the way sounds are configured has unlocked a raft of new features and effects. Starting with firearms and explosives, the ultimate goal is to create a more authentic, textured battlefield experience. 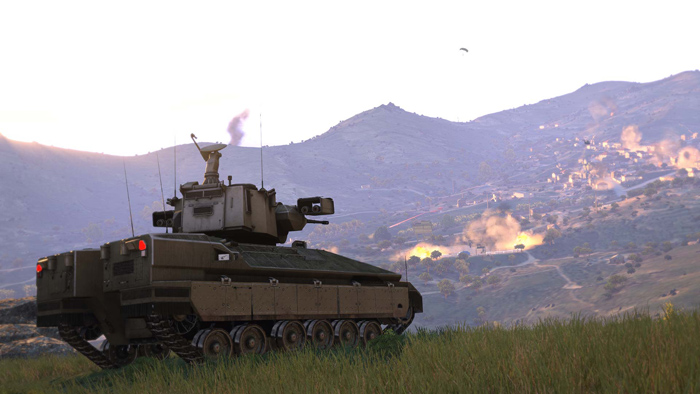 Weapons, explosions and vehicles now use a set of samples recorded at close and long range, which mix smoothly depending on distance. In game, distant fire-fights sound much more authentic!

Eden Update's ‘key features’ are supplemented by a variety of meaningful additions; in particular, there are several exciting highlights to mention.  A new font (Roboto), sits alongside the Purista headings; we hope game / launcher / website texts will be a little easier to read! The addition of ‘Analytics’ will help us better understand how players set up their game.

From a technology standpoint, we've improved Parallax Mapping and enabled HBAO+ (forerunners of a more substantial 'Visual Update' planned for Arma 3 soon™). It’s worth mentioning optimisations, too; our script improvements and additions have continued apace, while the addition of the ‘Geometric Occluder’ feature (courtesy of our friends working on DayZ) should help to improve rendering performance in larger cities.

Eden Update introduces several game-changing features that stand to improve the platform for years to come. However, it’s important, too, in relation to our upcoming development plans. With this summer’s expansion, Arma 3 Apex, we aim to deliver the ultimate expression of our team’s dedication to the project; a robust, extensible platform of unrivalled combined arms military gameplay (and beyond!).

Naturally, making complex updates to a live game is no simple matter; introducing them now, months in advance, provides a more solid foundation. Eden’s usability, audio-visual fidelity, and multiplayer enhancements are just the beginning. Over the next few weeks and months - on the #RoadToApex - we plan to roll out additional improvements. We hope you’ll join for the ride!