Arma 3 hails people of every flavor from all over the world. To get to know them a little better, we're hosting a series of mini-interviews with some of our amazing community members. These aim to give you a personal insight into their backgrounds, why they got into Arma, and how they typically experience the game. In this issue, we interview Papa Bear, a French content creator of Arma 3 screenshots and missions. 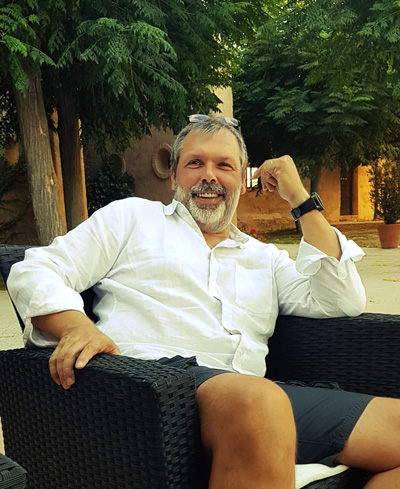 I was lucky enough to have a military career in the Troupes de marine (French Marines) which allowed me to see a lot of countries, it wasn't always on the best, but it is still a great memory.

So what is the origin of the name Papa Bear?

Without any originality, it's just a call sign in the "East Wind" campaign.

The very first one (Operation Flashpoint, if I'm not mistaken) was a demo version in a computer magazine a long time ago.

It's difficult, there are a lot of them, and even if I say that Arma 3 is probably the one I've played the most, there are many others that are always focused on flight simulation (Flight Simulator, DCS, Falcon4).

My work takes up a lot of my time, so when I have a little time I spend it with my family, my wife, and my friends.

What is your favorite beverage?

As a true Frenchman, without a doubt a good wine.

Why? Why would you do that?!

I started alone on my demo version a long time ago, without really finding it to my liking the team management which was too "heavy." But I still continued to buy the following versions of Arma until I got to Arma 3. That's when I searched on the internet for a team to play with. I found the 2RIMa Gaming team (which just celebrated its 10 years on Arma) with which is how I really discovered the potential of Arma. The creation of multi missions with this amazing sandbox and the creation of screenshots.

I've been creating a lot of missions for our team (I wasn't the only one) and for some time now I've been creating screenshots with some very cool POLPOX addons or pose mods such as Whiplash's Static Animations.

As a mission maker, what’s your favorite part of making a scenario?

Actually, all parts of creating a mission are interesting, except maybe the scripts I like a little less. Our scenarios have all been based on player-versus-environment (PVE) infantry combat, with insertion by different methods (air, water, or land vehicles). I find the main idea on various operation theatres with the main lines of combat actions. The rest is done directly during the creation of the scenario on EDEN with the implementation of different enemies or events that should provoke a reaction, the addition of a bit of randomness on the presence or not, or reactions of enemy units make the scenarios always unexpected. Often what I had imagined didn't happen as planned. That's where the charm of scenario creation lies.

Can you tell us about your favorite mission you’ve created?

The ones that are going as planned or almost as planned. The ones where the team arrived at the end of the mission without encountering a "technical" problem due to an error on my part during the creation of the scenario (it's never happened to me...), a bug in a mod, or similar game that prevents me from continuing the mission.

You said you enjoy creating screenshots, can you share your favorite with us?

I don't have 1 but 267 favorite images. The ones that allowed me to create a comic only based on Arma 3 screenshots. It's a mix between creating a story (a bit like creating a scenario) and the desire to make "beautiful” images.

How has your real-life military experience influenced how you play Arma?

Good question! My "life" before doesn't have any real influence on the way I play Arma now. I have always taken Arma for what it is, a game, and a game is not real life. So I play it without overthinking it, which is also the way my friends from the 2Rima team play. At home, the ranks, leaders, medals or other military "artifice" are not run. I do not judge those that do, everyone does what he wants, but I play with camaraderie, a lot of good humor, and only a minimum of seriousness. These last points are probably the most important in the game compared to real life.

It's difficult to talk about a single moment, there are so many of them with the 2Rima team friends. I think it's about a mission from my friend Faiavan (RIP), who worked really hard to make everything perfect and where nothing happened as he predicted, thinking that the AI had agreed to upset him.

The POLPOX's Artwork Supporter mod of course, the pose mods (Whiplash, ZL2, etc.) all these addons have made things so much easier for me. The AMF mod (French equipment, uniform, and vehicle) is only in its infancy but above all the Gemini OPEX mission (one of the best mod) which is played on many different maps and that we have permanently on our public server.

BONUS: Would you rather live (permanently) in a roller coaster park or in a zoo?

It's almost possible to do whatever you want, thanks to many mods and missions made by passionate people and for free, so why deprive yourself of it?