To support the lensmen among us, our very own Senior Designer @KarelMoricky wrote a handy guide about the new tools for screenshot-taking in Arma 3. Introducing the Splendid Cam, alongside some of the other Debug Console features he implemented, Karel walks us by a few of the basic settings and shares a couple of tips on how to make the ultimate screenshot.

Arma 3 can be quite a photogenic game. When you look at its screenshots, they often look more like the photos you'd take on your summer vacation rather than gritty frontline shots. As with real-life photography, capturing the perfect moment takes knowledge, preparation and, unsurprisingly, luck. The fact that you own a camera doesn't automatically make you a Pulitzer-winning photographer, the ability to rapidly press F12 in game won't turn you into skilled screenshot maker. However, Arma 3 ships with many powerful new tools which allow you to arrange and capture a scene in a way that real photographers can only dream of.

Craig Pearson from PC Gamer already wrote a guide providing some basic tips in his Postcards from Stratis: how to take fancy screenshots in Arma 3 article. Here you’ll find some well-known Arma 2 methods, sufficient enough for producing some pretty decent screenshots. However, you don't want to fight your last war, and thanks to the many new tools shipped with Arma 3, you won't need to. Let's take a look at them. 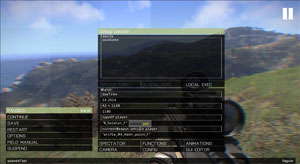 This is the latest version of my Arma 2 console, previously available only in addon variant. No installation is required this time, the console is now immediately accessible from the pause menu when previewing a mission from the editor.

The Expression and Watch fields helps you to execute and check game states and variables. If you know any scripting, the console will become a powerful tool in your hands, letting you adjust any scene on the fly. For those unfamiliar with SQF syntax, I'll provide some code examples later in the article.

For now let's focus on the set of buttons on the bottom. You may ignore Functions, Config and GUI Editor, as you won't need them for taking pictures. The Animations button opens the animation viewer, where you can find specific movements, useful when preparing a scene; more about this later. Spectator starts the newly introduced spectator camera, which uses the same camera mentioned in the PC Gamer article. However, the main star of the show is the brand new Splendid Camera, triggered by the Camera button. Designed specifically for taking screenshots, it's the tool you'll be using the most.

The first thing you'll probably notice upon entering the camera is that the scene is frozen. Units are not moving, tracers are stopped mid-air and explosions remains completely static. Compared to the previous camera, where the game kept running and timing action shots was a painful process, the ability to adjust the time speed and even stop it is the single most important feature of the Splendid Camera.

The camera overlay provides all the information you'll need. In the top left, you can find an explanation of all the controls and shortcuts. The bottom left corner shows information about camera parameters, like position or direction. The top right corner depicts previously saved camera settings, which can be restored any time. The bottom right corner contains sliders for adjusting scene visuals and environmental conditions. And finally, the horizontal and vertical lines divide the screen into thirds, helping you to align the scene composition.

The controls are based on helicopter and plane controls. However, the basic camera movement and rotation can be controlled using the mouse only.

As opposed to the previous camera system, you can now manipulate with camera roll, a feature that can instantly add a dramatic effect to almost any screenshot.

When setting up a scene, you'll constantly be returning back to the editor for tweaking object compositions. To prevent having to reposition the camera over and over again, you can save up to 10 camera parameters to your profile, so they'll be available even when you restart the game. All customizable settings are stored - camera position, direction, bank, zoom and focus, but also aperture, time of the day, overcast and time acceleration.

Apart from that, you can copy the same parameters using Ctrl+C and restore them later with Ctrl+V. They're copied to the standard clipboard, so you can paste them to any text editor and store them externally. There's also the ability to export parameters including camera execution, which - when executed from the debug console's expression field - will start the camera and automatically load the settings.

For example, you can restore the picture below the header by calling the following expression: 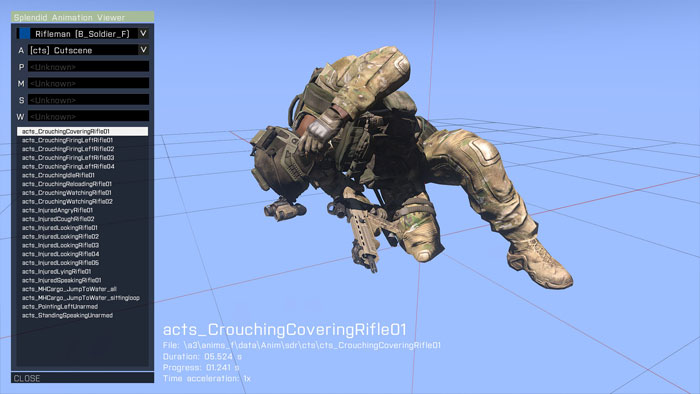 Let's now return to the debug console and check out one more handy tool - the animation viewer. It takes some time to load, because it's crunching through all animations in the game (including community ones, when there are any) and sorting them into logical categories. When animations cannot be categorized, they are automatically sorted into the category. Many legacy animations from Arma 2 suffer from wrong categorization and you can find them here. 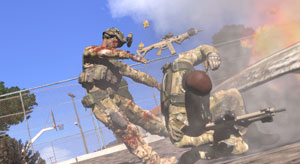 As for controls, they are much simpler than those of the Splendid Camera:

Once you picked an animation you want to use, you need a way to play it on a person. The easiest way is to insert the following code to the init field of a soldier:

You can't play the animation straight in the init field, because the engine cannot play animations upon mission start and some delay (provided by spawning an additional code) is required.

There will be times when you'd want to freeze the animation on a cool looking spot, so you don't need to worry about timing. To achieve this, simply add a delay after playing the animation (3 seconds in the example) and then disable simulation of the soldier:

Now you know the basics, let me share some general tips for preparing a scene specifically for taking screenshots.

The result will be XYZ array, looking like this

The first value is coordinate east-west, the second is south-north, and the last one is altitude above ground.

To teleport the object for example 1 meter to the east, place the

Alternatively, you can teleport yourself simply by switching BIS_fnc_camera_target for player.

It's inevitable that you'll encounter some visual glitches while taking screenshots - collision issues, animation deformations, lighting problems, you name it. Most of today's games suffer from this, and the more you play, the less you notice them. But show a picture to non-gamer and you'll be surprised by how many things out of place they spot.

For example, look at the image above. I guess at the first glance, it appears to be completely fine. Let's take a closer look.

Internally, we have very strict rules for releasing images and even the smallest of collision glitches can render a picture un-publishable. However you don't need to worry that much, because if a picture is otherwise amazing, no issue can harm it. After all, it's our fault the game is not perfect. 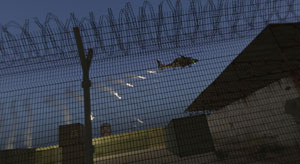 We start looking at photos at an early age, seeing them every day in newspapers, magazines and, most recently, on the Internet. By now, you’ve probably seen thousands and thousands of photographs. Some were good, some bad, and the majority just average. And there are a few truly excellent ones, which you still remember and think about. You may not recognize the names of Robert Capa or Joe Rosenthal, but you definitely know their work.

And because of this experience, you also know when a screenshot isn't right. With splendid camera, animation viewer or in-game scripting, you have almost unlimited possibilities for capturing an ideal image. Where real-life war photographers are risking their lives in their hope for a lucky shot, you can freeze the scene, set the time of the day, and position the camera anywhere you want. Yet it doesn't mean you should. When taking a screenshot, approach it like you were standing behind the camera. Could you reach the spot where it is? Would you actually want to, or would it be too exposed to enemy/friendly fire? Are you interested in the scene only because it's 'cool', or is it strong enough to tell a story? And could it mean something also for people unfamiliar with the game?

Arma 3 is an authentic game, and it provides a great opportunity to take diverse screenshots. Now you know how, it's up to you to turn your inspiration into splendid images. Don't forget to share your work on Steam, on the official forums or on our Twitter and Facebook channels.

Note: All of the attached screenshots were taken in the publicly available Arma 3 Alpha, using the same methods described in this guide. No post-processing in an external image editor was applied..

The competition is now closed and we'll be revealing the winners later this week. Thanks everyone for participating!