Next up in our 'Report In!' series, a discussion with one of Bohemia Interactive's 'men of motion' and some 'behind the scenes' images have been declassified and are ready for immediate analysis!

We're often asked to let some of our people talk about what it's like to develop a game at Bohemia Interactive (BI). 'Report In!' gives you a more personal perspective on our team, a more detailed look at the way we go about our work, and fresh information about our ongoing projects.

Captured in motion this week is Zdeněk Vespalec, who leads and manages the dynamic process of bringing new and refined animations to Arma 3. Below, we discuss all things animation, present an overview of the plans and summarise the work carried out so far.

Tell the people a little about yourself. What's your role? How long have you worked with BI? On which projects have you contributed, and what's your favourite Bohemia Interactive game or experience?

[thumb class="pull-left" clear-xs]a3_report_6.jpg[/thumb]Zdeněk Vespalec (Vespa): Hello, my name is Zdeněk Vespalec, and currently I work as animation/characters lead on Arma 3. Formally, I joined BIS alongside the many ex-Altar employees during the big acquisition back in 2010, but there was in fact close cooperation between these two studios since 2008 – so, my first actual work for BIS was the creation of various buildings and structures for Arma 2 (A2) and Arma 2: Operation Arrowhead (A2OA). If you ever fell to your death from a big industrial smokestack on Chernarus - then that’s my work, no need to thank me ;)

After some minor finishing work on A2OA characters, the opportunity to make whole characters from the ground up came along with the British Armed Forces (BAF) DLC. We're all really proud of our work on BAF - with some great solider models produced - alongside the chance to familiarise ourselves with the animations pipeline, and scope out room for improvements! Following that, we created characters and concept work in pre-production of a larger, future project, which turned out to be Arma 3. As for my favourite BI game, well - Arma 3, definitely! This is the game we've invested ourselves most into.

Vespa: I once got hit by a car while on work assignment for BIS. True story. [note, the car was parked at the time]

What can you tell us about Arma 3's new character animations? How do they compare with previous Arma games?

Vespa: They're better, faster, smoother and more authentic than ever before!

Well, we expected you to say that! But what about the details? Are there any new 'stand-out' animations worth mentioning, for example?

[thumb class="pull-left" clear-xs]a3_report_7.jpg[/thumb]Vespa: Diving, most obviously. We presented some of that at last year’s Gamescom 2011. Meanwhile, we've also added an 'armed diving' variant, where you can shoot from an appropriate weapon. That being said, the whole underwater combat thing is completely new and undergoes its 'trial by fire' right now. As for movement on land, in addition to the existing movement modes (walk, run, sprint), there'll be additional one - what we're calling the 'tactical pace' - which is essentially a jog with weapon raised.

Another feature worth mentioning is 'alternate poses', which is an experimental feature we're keen to validate with the Alpha and see if it earns its place. These are extensions of the three basic stances (stand, kneel and prone). With them, you can adjust to have a high/low or left/right variant to each stance. In terms of gameplay, we'd expect to see improvements in finding effective cover and being able to fire from it.

What about weapons? At last year's Gamescom we saw some reload animations and some recoiling barrels. Can you tell us about the latest ideas and plans?

Vespa: You can expect tailored reload animations for each weapon, and animated gun parts, for example the recoiling barrel of the GM6 Lynx. A lot of attention has been given to setting up the weapon model more aesthetically from the 1st person perspective, too.

We also aim to improve weapon behaviour, which means tweaking recoil mechanics, precision and weapon sway to more properly reflect the different states of the shooter, factoring in fatigue and injury, for example. Our goal is to not only improve the feel of firing guns, but also make firefights flow as close to reality as possible. The latter will actually be a tough one to crack, and again we hope that the players of the Community Alpha can feed into this process.

[thumb class="pull-left" clear-xs]a3_report_8.jpg[/thumb]Ragdoll is a huge piece of new tech for Arma's 'Real Virtuality (RV)' engine, how's that coming along?

Vespa: Ragdoll by itself is a pretty standard feature in games, so it's nothing unexpected from an animator’s point of view. You simply feed it proper values and it works. (Though I bet my colleagues that spent countless days just implementing the damn thing would slap me for this statement!).

The real catch is making ragdoll work well in multiplayer. Because Arma requires precise handling even of dead bodies, the shape and position of ragdoll needs to be synchronized with all clients. There are various solutions for this, and we're actively testing them now..

And what about animations on a smaller scale? Facial animations, for example, can we expect to see any improvements here?

Vespa: Yes, definitely. There is already a major improvement in facial animations. Besides the completely new facial skeleton, we abandoned the idea of rotating heads and animating eyes procedurally, because it just made the AI characters look like alien robots no matter what!

Instead, regular animations are being used, and it already makes the characters look much more lifelike. Also, we're focusing upon animating character's fingers – micro-motions, hands gripping things properly, etc. These are small details, but they add a lot to the impression.

[thumb class="pull-left" clear-xs]a3_report_9.jpg[/thumb]What about the way the game engine handles the animations and new movements? Will there be any improvements at a more technical level?

Vespa: This area is still intensely in development, so I can't be very specific. Mainly, we've focused on the basics. That means smooth interpolation of animations, elimination of warping, increased responsiveness of controls, removal of artificial limitations to player input, and many more!

When we started, Arma had many 'legacy' features, some brilliant, some just in need of a small update to reach today’s technical standards, others - even if well-intended - did more wrong than good and had to go! The changes we make are being discussed with designers and are meticulously play-tested, so that the game handles them in the best possible way.

So, can you tell us a little about the process? How do you go about 'motion capturing', anyway?

Vespa: Motion capturing is an expensive, demanding, but actually very fast process. Most of Arma 3's content was recorded in span of just a few days. A typical "mocap" day starts by dressing-up the poor actor and calibrating the apparatus, which can take about 2 hours. After that, the actor cannot remove the suit, or it would ruin the takes. So, after dressing him up, we record as much material as possible, usually into the night! This is quite demanding on the actor.

Most of the time is spent after this process has finished, however, where the takes are processed and plotted on our standard in-game skeleton, and they undergo the long process of editing and implementation in game.

[thumb class="pull-left" clear-xs]a3_report_10.jpg[/thumb]And who's the lucky chap that gets to act out these animations for you?

Vespa: There are two, actually! Most of animations were recorded by our animator Pawel "Smookie" Smolewski, who also happens to be a military enthusiast. It's an ideal combination, because acting for mocap requires experience from both fields. Not only you must move in proper military manner, you also need to respect a quite restrictive set of technical rules for in-game animations.

Our other man is Dean "Rocket" Hall, who works for BIS as a multiplayer designer, but is actually a serving member of New Zealand military. He recorded about a third of the moves, and provides his insight with other animations and features. Thanks to these guys, you can look for most authentic moves ever done in Arma series..

In 2235, a BIS-3000 nanomorphic poly-alloy assassin is sent back in time to destroy all videogames. As game after game is purged from history, you've got one chance to save a single game from... termination. Which would it be?

Vespa: Oh, the Windows maze screensaver - I can spend hours with that baby without getting bored!

But seriously, I would save probably something easily mod-able and with multiplayer, which could keep me occupied almost indefinitely. Like Half-life, or that one milsim I can't remember right now. Even though I very much enjoy modern cinematic games with epic stories, they don't have true long-term value for me, which lies in messing with stuff and making it into my image.

We've also put together a quick sneak preview of a future Arma 3 update. It's a chance to see some of the new lighting and animations at work, ahead of a bigger update on a different subject... 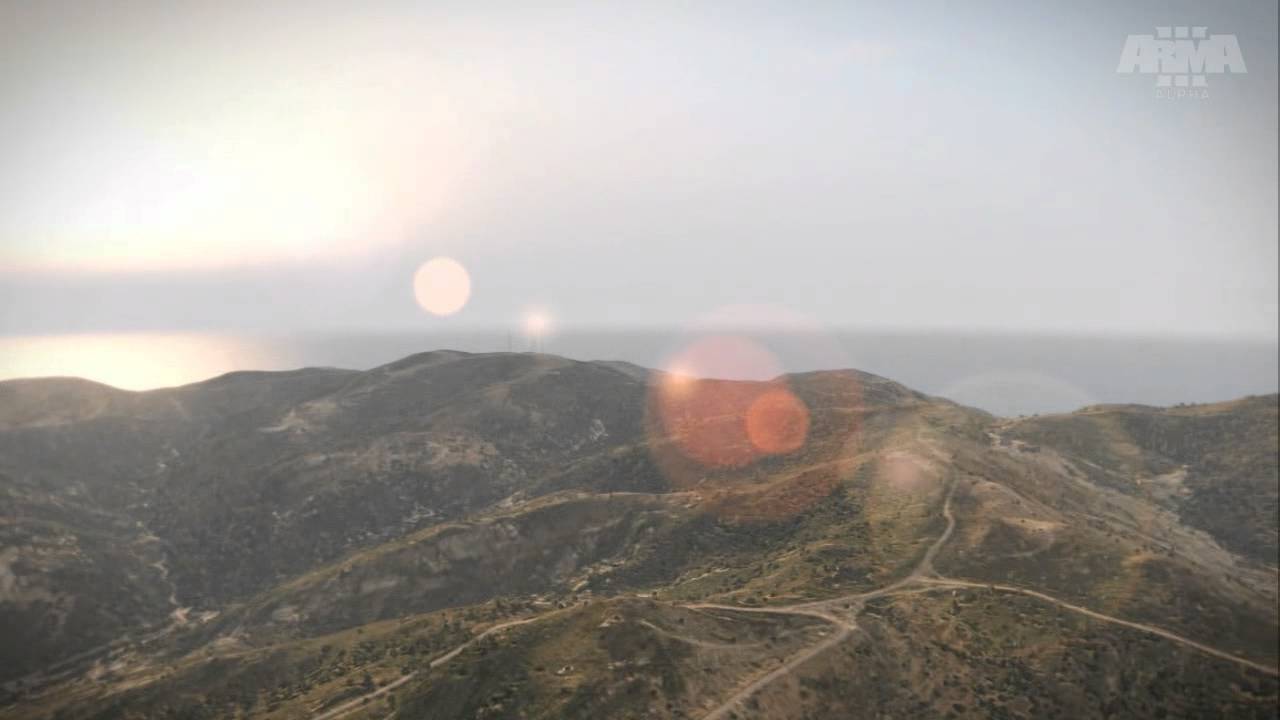