Last Spring, the Arma 3 development team were handed the ideal opportunity to get to grips with a powerful anti-materiel rifle, the Gepard GM6 Lynx. Below, Creative Director, Ivan Buchta, describes the field trip and offers up some behind the scenes imagery!

Fieldtrips such as these contribute to the ongoing development of a new sound engine for Arma 3. Featuring improvements for things like vehicle and weapon SFX, it's certain to be big step up from Arma 2 with, for example, stereo sounds for weapons and vehicles estimated to use around 50 samples for their engine and exhaust, and 20 samples for the wheels on differing terrain. That compares with a total of around 15 samples per vehicle in Arma 2.

A new system of hearing weapon reports at different ranges, with distance attenuation and filtering, in also underway. Again, it's a more sophisticated solution than is currently present in Arma 2, and, of course, we look forward to presenting some ingame examples of these features and improvements over the next few months.

As with many exciting development stories, this one started with a rogue e-mail: "I talked to a guy in a Hungarian company manufacturing hi-calibre sniper rifles with unique construction. They are okay with giving us the CAD data and our using the rifle in-game, and we can visit to take pictures and record sounds if we want..." One of our artists had left me a message together with some YouTube links; well, that's really all we needed to know!

Following the kind offer from SERO, a weapons development and consultation company, based in Hungary, we decided that their anti-material rifle - with its ultra-modern construction and mighty appearance - would be a welcome part of Arma 3's arsenal! Soon after that, the artists were provided with CAD blueprints and started recreating the rifle for A3, while we were invited along to a demonstration of the Gepard GM6 Lynx, which took place in Hungary last spring. Getting two sound engineers and A3's designers to a car departing from Brno at 2:30am has been one of my biggest logistical achievements to date. :)

Let me fast-forward through the preparations and some night-driving to an early morning in the Hungarian lowlands: dimly-lit scenery full of low-level mist with the blades of wind turbines spinning overhead. We made our way through Budapest and ended up in a factory complex, where we were welcomed by Gábor Szabó, SERO's graphical artist and big fan of our games, and by Mr Endré Szabó, SERO Special Division's CEO. After trading a few T-shirts and games for some scarily-sized ejected brass casings, we made our way to the shooting range through the increasing morning traffic. 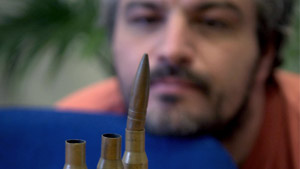 On the shooting range, we had few a minutes to set up the microphones, and the shooting commenced. There were two rifles in .50 and 12.7mm DMS calibres. Both appeared to be real beasts. The dust kicked up by the sheer power of each shot spoke of the amount of kinetic energy a shooter has to cope with. Even though the weapon's construction - which sports a recoiling barrel - helps a lot, SERO engineers had to come up with special casing for the electronic targeting system's camera, capable of withstanding the power generated by the shot. We were given a great lecture on constructing, firing and maintaining such a rifle.

The setup we used for the sound recording may appear scanty (a few mics and two tiny boxes), but it had been tested and proven before on the Czech Army's firing ranges two years ago. There were microphones capturing various wavelengths, echoes and sounds coming from different parts of the rifle. 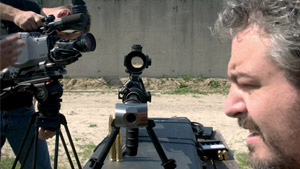 At the very end of the session, we were offered the chance to send two .50 rounds into a nearby paper target. As Mr Szabó stated, "the worst thing that could happen is that you miss the berm and the bullet would continue to a nearby village, or you displace your shoulder and the optics would tear into your forehead." Naturally, though, the safety precautions were top notch and our shooter was given a thorough instruction and supervision, which resulted in two successful hits of the target and a superb first-hand experience for our configuration designer to put to good use.

Last but not least, we would like to say a huge thank you to the guys in SERO Special Division for their hospitality and for the unique opportunity, especially to Gábor Szabó for getting us to the event and to Endré Szabó for the great experience. We will do your rifle justice in Arma 3!