Arma 3 hails people of every flavor from all over the world. To get to know them a little better, we're hosting a series of mini-interviews with some of our amazing community members. These aim to give you a personal insight into their backgrounds, why they got into Arma, and how they typically experience the game. In this issue, we interview Lou Montana, a major contributor to the Bohemia Interactive Community Wiki and community veteran.

So what is the origin of the name Lou Montana?

It is a name with a little story. The “Lou” part comes from the wolf animal’s name in French, "loup," adapted as a name. It was actually the name of a character from a comics I drew in middle school. The “Montana” part is from Scarface that was one of my favorite movies at one point. I jokingly added Tony’s last name for a time, but in the end, it sounded nice and made a composed name (sometimes required by games).

I am among the “old-timers” who played Operation Flashpoint: Cold War Crisis! And all the other titles after that.

I enjoy motorcycle rides and road trips with friends. Due to the current lockdown, I focus on cooking and can safely say that I can decently cook now, even more than before.

What is your favorite color?

Green, because it is a call for nature. Alternatively, it is a good color for camo too. Blue for the calm. Matte black for cars.

No, usually on a chair, but I can eat “Hawaiian” pizza (that is not Hawaiian), yes. 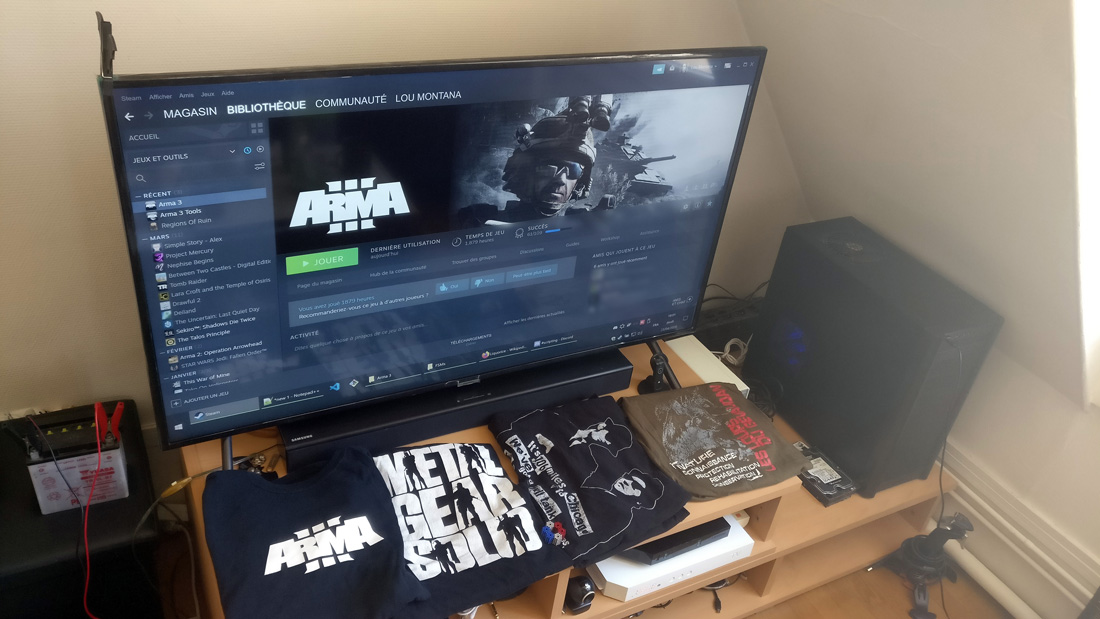 Plain and simple, the Operation Flashpoint’s mission editor. I sure enjoyed the strict gameplay, the atmospheric campaign, and the unforgettable characters of it; after that, I enjoyed creating scenarios and saw the editor’s full potential quite early. After some time messing with waypoints, ammo crates, and triggers I got into scripting that allowed even more freedom. Scripting never let me go ever since!

What kind of scripts did you write and most enjoy?

In the OFP days, I did a somewhat simple “bullet time” script that put the camera inside the fired bullet. It was not that much scripting, but the effect was exceptional at the time. I don’t really script whole frameworks, but when I think of a cool ambiance effect to add, I try and do a proof of concept. If it works, I either include it in a currently developed mission or keep it for later use. My latest examples were blinking effects, colored NVG filters, or shoulder/head raindrops. All without a mod!

Given my “low” hours count in Arma (“only” 1900 hours), I can safely say that I don’t play that much now. I played every official singleplayer mission (again, congratulations on the Laws of War DLC, serious and responsible approach), played some cooperation missions with friends (my favorite game mode), but I spend most of my Arma time on scenario creation - when I finally have that one good idea! I also create proof of concepts, do debugging, help scripting people on the Arma 3 Discord server (be sure to read the pinned messages), and of course, filling the Community Wiki.

How many hours do you think you’ve spent helping to maintain the Community Wiki?

Oooh, interesting question. I don’t think I should try calculating this! It is clearly way more than I played Arma 3 - but it is time I do not regret!

What was your favorite Arma 3 singleplayer mission? No spoilers!

I enjoyed Contact (it added plenty of animations and content too), the eerie setting all along the campaign does a lot for it.
I will repeat my praises about the Laws of War story that is technically and storytelling-wise brilliant. It shows once again that Arma is head and shoulders above pew pew games; it makes you consider real-life situations from different perspectives, and as usual, makes you think. In Arma, your brain is your best weapon!

It would be an Arma 2 moment actually! A friend and I connected to a random server to see what the mission was about. The mission started as a helicopter crashing in the forest and the whole group had to defend against inquiring groups of enemies. After healing everyone, we had to avoid BMPs and foot patrols to reach the top of surrounding hills in order for the (scripted) long-range radio to reach HQ. The first hill the signal was too weak, second hill the same, and third hill the patrolling Hind went away… we successfully sent the signal and got confirmation of a helicopter pickup on its way. But! the Hind comes back and we hit the deck. The flying "tank" stops less than 30 meters away from me and someone takes the opportunity to arm a rocket launcher, aim at the immobile target, and... miss. There was a floating, surreal moment until everyone finally decided to fire everything we had on the threat, mostly the hull; I was the machinegunner and tried to aim for the tail rotor. The Hind did a first pass, I rolled on the side and only get injured by the autocannon shots. Then after passing, in the distance, the Hind stopped, turned around, faced us… Boom. A trail of smoke came out of its tail. I follow this white line with my in-game eyes: 1 km away, the pick-up MH-60’s escort, two AH-1, shot missiles towards the threat, and took it down! Even though foot patrols could still be a concern, we knew from there that everything will be fine - and it was. We boarded the transport helicopter and completed the mission.

I don’t often use mods (I know, shame) because I try to make my missions working for everyone, but if I have to pick one it is definitely the CUP mod suite! It is always a pleasure to go back to Chernarus and aimlessly fly the UH-1… or the Hind.

Press G for grenade. Dang, IceBreakr beat me to it. Hmm... read Arma 3 Getting Started and most importantly, have fun. Do not be afraid to start and do not be afraid to help - know that there is a difference between newbie and noob. The learning curve doesn’t have to be steep if you only aim for what you like - you can enjoy your time with only a piece of the game. To say, the huge range this game has!

Having a very bad dad joke reference/line in the next Arma title!

If you try to debug your mission, use the -showScriptErrors flag (or “Show Script Errors” Launcher’s option). Please respect intellectual property and try to upkeep this sharing and cooperative community mindset that also helped me learn everything I know about Arma today - follow Wheaton’s Law in that aspect. No other Operation Flashpoint game was released after Resistance (and Elite).
It is written Arma.