We're excited to announce an immediate Free Week for Arma 3 on Steam, starting today January 14th (10 AM PST), and ending on Sunday, January 19th (10 AM PST). To play Arma 3 for free, you can simply visit the Arma 3 store page on Steam, and fire your mouse left-click at the green "Install" button. 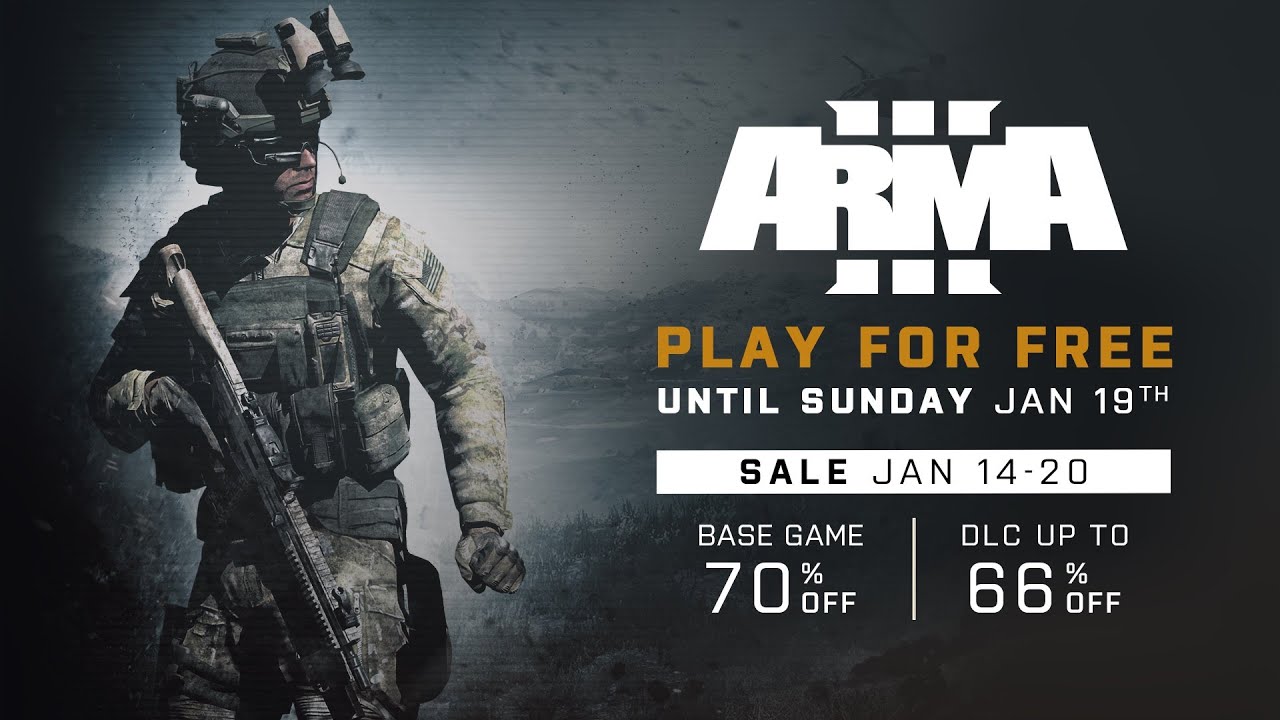 To continue playing Arma 3 after the Free Week has ended, you will be able to seize a massive 70% discount on the Arma 3 base game, and/or enjoy savings of up to 66% on Arma 3 DLC packs and expansions until January 20th. When purchasing the Arma 3 Ultimate Edition (complete-your-collection bundle), you will seize an additional 15% bundle discount on top.

During the Free Week, all Steam users will have free access to the Arma 3 base game plus the Arma 3 Apex expansion. This also includes Arma 3's full "The East Wind" singleplayer campaign and the "Apex Protocol" co-op campaign. New players might also familiarize themselves with the game's controls via the "Prologue" tutorial campaign.

Arma 3 was first released in 2013 and has sold more than 5 million games to date. Over the past years, it has been reinforced by 80 platform updates, as well as 10 DLC packs, and 2 expansions. Meanwhile, Bohemia's content creation community has shared more than 70.000 items to the Arma 3 Steam Workshop. Arma 3 continues to be one of the most popular games played on PC, with a 90% approval rating based on 100.000+ Steam user reviews, and an average playtime per user of 150 hours.

Have a great week!

You can find the system requirements for Arma 3 on the bottom of the Arma 3 Steam and Bohemia Store pages. Since the game has been out for a few years now, it's quite likely that any gaming PCs or laptops that were bought or upgraded during the past 6 years should be able to run the game without problems.

Which languages are supported in Arma 3?

People play Arma 3 in many ways, and there's no one right way to becoming familiar with Arma 3's core gameplay mechanics. That said, we advise most players to play the "Prologue" tutorial campaign first, which will help you get a hang of most of the basics. Then, if you want to learn more about specific game mechanics, you might want to go through the in-game Virtual Training courses. You can find all of this and more under the Tutorials button in Arma 3's in-game main menu.

Where can I find more in-depth information about playing Arma 3?

The beauty of Arma 3 is that you will keep discovering new things over a longer period of time. So don't feel rushed to immediately learn everything that Arma 3 has to offer. If you do already want to dive a bit deeper, then be sure to take a look at the in-game Field Manual (available under Tutorials in the Arma 3 main menu), watch our official Community Guide video series (see playlist on YouTube), browse through the many excellent Steam user guides, and take a look at the excellent Getting Started Guide on the /r/arma subreddit.

What is the Arma 3 Steam Workshop?

The Arma 3 Steam Workshop is where you can find a vast library of Arma 3 player-created content. You can browse through the newest, most popular, or highest-rated Arma 3 scenarios, weapons, vehicles, total conversions, and more – and you simply need to click on 'subscribe' to add them to your game. Find something that you like? Be sure to give it a thumbs up to show your appreciation to the author and let other players know it's worth checking out.

I'm looking for people to play Arma 3 with. How do I get in touch?

One of the best ways to experience Arma 3's multiplayer is by playing in a group. There are thousands, if not more, Arma 3 community groups, who all play the game in their own way. Most of them are always on the lookout for new members, and will be eager to show you the ropes. There are several ways to get in touch with existing community groups. You can try the Arma 3 Units website, check out the dedicated /r/findaunit subreddit, visit the Bohemia forums and Steam Community Hub, or simply join the Arma Discord server and post a message in the #looking_for_game, #looking_for_squad, or one of the other appropriate channels. Good luck and have fun!

Why can't I connect to certain multiplayer games?

This may be caused by several things. Servers may be hosting a premium DLC terrain (Tanoa from Arma 3 Apex, or Livonia from Arma 3 Contact) and/or require the installation of certain user-generated add-ons and mods. Finally, there may be connection problems between you and the server due to firewalls or other obstacles along the way. Aside from the Tanoa and Livonia terrains, all players are able to join servers that make use of premium Arma 3 DLC content. Some restrictions to the use of this DLC content might apply.

I'm experiencing framerate issues. What can I do?

Your performance depends on a number of variables, such as your hardware configuration, your in-game video settings, whether you're playing singleplayer or multiplayer (and in case of the latter, what multiplayer server you're playing on), and if you're running Arma 3 with mods. Our recommendation is to first try to configure your in-game video options to match your hardware setup (use auto-detect as a basis – and especially look out for your Visibility and Anti-Aliasing settings). It's also recommended to install the latest graphics hardware drivers for your graphics card(s). Should you not be using SSD storage devices, consider defragmenting your drive(s). Finally, use the Steam client to verify the game data integrity automatically.

Arma 3 has quit in an unusual manner. Where can I go to troubleshoot?

Please take a look at this page with a description of common error codes and proposed solutions.

My friend already owns Arma 3, but doesn't yet have the Arma 3 Apex expansion. Can we play the Apex co-op campaign together? Or on Tanoa multiplayer servers?

Yes, you can! All Steam users have free access to both the Arma 3 base game and the Arma 3 Apex expansion for the duration of the Free Week.

I have another question.

Please try to search our forums for answers to your questions. If you want to get a quick answer, you might also want to join the Arma Discord server, where veteran players are often able to answer your questions. Lastly, you can contact us via Twitter, or write our support staff at support@bistudio.com – just be aware that we might not be able to respond on time before the Free Week has ended.