This Tuesday September 22th, starting at 18:00 UTC, Bohemia Interactive will be hosting a special sneak preview live stream for the upcoming brand new Eden 3D Editor for Arma 3. The session is expected to be about one hour and will be streamed to the official Arma 3 channel on Twitch.

During the live stream, Eden Editor Designer Karel Mořický and Arma 3's Creative Director Jay Crowe – supported by other members from the Arma 3 devteam – will provide a first look at the new editor, demonstrate its features and improvements over Arma 3's original 2D editor, and discuss some of the key design decisions. The only thing that's changed is everything. 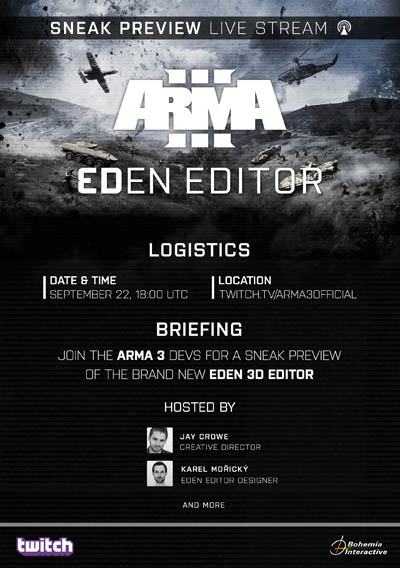 With its long-standing focus on user-created content and modding, the classic 2D scenario editor has always been a major staple of the Arma series. Taking a massive leap forward, the powerful new Eden 3D Editor for Arma 3 will give players far more control over their creations than ever before. Users will now be able to directly create or edit entities, such as characters, vehicles, buildings and other objects, within the 3D game environment. They can also set mission objectives, define waypoints, control time of day and weather, and make use of all other functionality previously available in the classic 2D editor.

All of these capabilities can be accessed via Eden Editor's easy-to-use interface. It enables even the beginning user to create a basic single- or multiplayer scenario in a matter of minutes. The more advanced scenario creators, on the other hand, can continue to make use of the extensive library of custom scripts. Plus their previously created scenarios made in the original 2D editor will be backwards-compatible. In addition, modders can extend the editor's functionality via custom plugins. As such, the Eden Editor will form the go-to destination for playing around in Arma 3's rich military sandbox platform, featuring detailed simulation, large-scale terrains, and a wide variety of soldiers, weaponry, vehicles, and other objects.

Last but not least, due to the seamless integration of the Arma 3 Steam Workshop into the Eden Editor, sharing your scenario, and downloading the scenarios made by others, has never been more easy. With more than 16.000 scenarios, addons, and mods published to the Steam Workshop at present, Arma 3 players already have access to thousands of hours of additional gameplay – and this number is expected to grow significantly with the anticipated introduction of the new editor.

The new editor will be made available to all Arma 3 players for free as part of a future platform update. More details will be provided during the sneak preview live stream. The Eden Editor's release date will be shared at a later date.