As we’re approaching the launch of Arma 3, we check in with Playable Content Lead Jaroslav Kasny to discuss mission design!

Jaroslav is the Playable Content Design Lead on Arma 3, which means, among other things, he’s in charge of the campaign, showcases, challenges and multiplayer scenarios. We asked him to report in and tell us a bit more about what it means to develop single- and multiplayer content for a game like Arma 3. 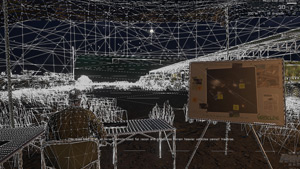 [thumb class="pull-left" clear-xs]jaroslav_kasny.jpg[/thumb] Tell the people a little about yourself. What's your role? How long have you been with Bohemia Interactive? Which projects have you contributed to and what is your favorite BI game or mission?

Hello there, my name is Jaroslav Kasny and I’ve been working at Bohemia Interactive for almost 8 years now. I contributed to projects like Arma 2, Shade, Alpha Prime, and Carrier Command. I’m currently working as a game designer, but you could actually also hear two of my soundtracks in the games mentioned above. As Playable Content Lead I’m responsible for everything that is tied to the playable content in Arma 3.

I own a yellow scootmarine ;-)

We spoke with Lukas Haladik before about sandbox design, and we talked with Borivoj Hlava about particle and ambient life design - what is playable content design?

Playable content design is directly related to the game missions. Basically everything which a player will be playing (except his or her own community scenarios) will be made by our department: singleplayer missions, multiplayer scenarios, and the campaign.

So what would be a typical process for creating a single campaign mission? How does it start, who is involved, how long does it take to finish, etcetera.

Creating a (good) mission is a pretty complex operation. Obviously, it starts with an idea. This idea is followed by an evaluation where we also consider the context, restrictions and limitations. For example, when creating a campaign mission, you must be aware of the story, the available assets (vehicles, weapons, objects), the time and the location.

[thumb class="pull-left" clear-xs]report_pl_content_1.jpg[/thumb] Overall, developing missions is a process based on iterations. After an idea has been approved, we continue with the analysis. We do a lot of additional brainstorming, taking various aspects into consideration. Although this might cost time at first, eventually it will save us time, as it helps us to avoid many potential complications. Then, based on the analysis, we will create the mission prototype. This forms the very basic state of the mission, and it enables us to properly evaluate whether our idea was good or not. Even though if in the analysis everything seemed legit, sometimes it will still happen that you have a great idea, but it’s simply not working. It then needs to be tweaked, or perhaps even completely scrapped.

Of course, a major part of the process is also the testing. Missions must work in various situations, and we know that each player will use a different tactical approach. Thus, one part of the testing process is that the guys in the QA team will deliberately try to break our missions.

[thumb class="pull-left" clear-xs]report_pl_content_8.jpg[/thumb] Altogether you can see how it takes weeks to complete the missions you’re currently playing. And, for the Arma insiders: “if you see the bug, it’s…” ;-)

How does this process differ for multiplayer scenarios?

The creative process for an MP mission is very similar to SP, but of course you need to calculate with the fact that there will be more than one player (ha, isn’t it called multiplayer because of this? ;-)). This does make things more complicated, as it means a mission must be absolutely bulletproof and strictly follow the sandbox rules.

What in Arma 3 makes the playable content design truly unique from other games? And what makes it the most fun to develop?

Arma is an open-world game. On the one hand, this means you can do almost everything you want, but you can also screw up things completely. It’s a double-edged sword, but to me, the benefits of having such an open game to play with, and develop for, massively outweigh the complications.

Perhaps you already touched upon this topic in your previous answers, but what would you consider as the most difficult thing of creating Arma 3’s playable content?

[thumb class="pull-left" clear-xs]report_pl_content_3.jpg[/thumb]It’s a challenge all right. Perhaps the most difficult thing is the constantly changing platform. Mission design starts almost at the beginning of a game’s development, which means that everything else, such as the environment, is constantly changing. Also, sometimes we create a mission even when the assets needed for the mission do not exist yet. In this case we must really think in advance. How will it affect mission? Are these assets really needed? Can we use something else? Do we have a backup plan? We ask ourselves these questions all the time.

Lastly, perhaps related to the previous questions: as one of the BI veterans, having worked on projects like Arma 2 and Carrier Command, can you name something you learned from these projects that is benefiting Arma 3?

[thumb class="pull-left" clear-xs]report_pl_content_1.jpg[/thumb]Right, well I’d say it’s an ‘evolutionary’ process. It’s not just the game that is being developed, people change as well. I now know things I didn’t know before. Over the years we established many development guidelines, and based on my experience, I keep evaluating how the dev pipelines can be improved. Going back to Arma 3, I think this is making us much more efficient than before and improves the quality of our output compared to the previous Arma games. To sum it all up, I’d say that experience is the benefit itself. But it remains difficult to point towards a single thing, because this question touches upon two key aspects of development: technology and people.

Yeah, our vision is that missions must be entertaining, but the content of the mission must be grounded in reality. This means that everything in our game is as authentic as possible, focused on delivering a believable soldier role-play experience. That’s what makes Arma 3 different from other games. It might not appeal to everyone, because it does make Arma 3 a much more difficult game, but once you get the taste for it, you will want to keep learning - and you’re in for many great hours with this game.

Some players like Arma 3 to be the most hardcore possible, while others need a bit more forgiveness. What are you aiming at, and how do you strike a balance between the two?

[thumb class="pull-left" clear-xs]report_pl_content_4.jpg[/thumb] Roger, that’s a good question. As I said before, Arma 3 is definitely a hard game. Players need to be willing to learn. Especially in the beginning you will often die without knowing why. It’s part of the authenticity. That said, the game does offer multiple difficulty options, letting you play as a novice or as a veteran. You can also enable some ‘helpers’ such as 'Extended Armour', 'Auto Guide AT', plus things like ability to see who is friendly, who isn’t, and so on. There will not be a separate tutorial like there was in Arma 2, but this time we’re trying to ease people into the game in a more subtle and natural way – learning by playing so to speak.

Let’s also talk about some of the new stuff in Arma 3. What improvements and new features relate to your work and how?

Arma 3 includes plenty of new vehicles, weapons and other assets. We have an amazing, massive open world available for our missions. We’ve also got new scripting commands at our disposal. But perhaps the most noticeable new features are the underwater world and UAVs. Of course, it’s challenging to work with such new assets, as everything is under development, but I hope they help to make our missions more entertaining.

The campaign will be released across 3 episodes after release. Can you tell us some more about these episodes, and the campaign in general?

[thumb class="pull-left" clear-xs]report_pl_content_11.jpg[/thumb] The campaign takes place during a world crisis, and the player is part of a peacekeeping deployment on Stratis, which is trying to reduce its presence there. Unfortunately, something happens (no spoilers), but the result is that he must fight against a stronger enemy. Although I don’t want to say too much about the story just yet, I can promise that players will take on many roles in the huge world, as a NATO soldier or even as a part of the guerrillas. It’s definitely an adventure full of twists. And, while the campaign unfolds, you’ll also gain access to more and more vehicles and weapons – which is constantly changing the dynamic in the gameplay.

What role does the story play in the campaign; are you ‘just’ a soldier sent on a mission, or does your character have any special significance?

You start out as an ordinary soldier, but during the campaign, it becomes clear that you have unique talents and a unique skillset. This is the reason for the powers in command to move you up the ladder as you proceed in the campaign.

Last but not least, can you define YOUR ultimate Survive/Adapt/Win moment in Arma 3?

As a developer, the ultimate survive/adapt/win moment is almost upon us: release. I look forward to your stories and feedback!

[thumb class="pull-left" clear-xs]report_pl_content_10.jpg[/thumb] There are plenty of things I like, such as jogging or other kinds of exercise, reading books, dissecting electronic devices, and of course spending time with my family.

What tip(s) would you give to aspiring mission designers?

There are probably millions of useful tips, but here’s at least a few:

After several unfortunate twerking incidents, the QAtarian government decides to change its policies and transform their state into a cultural utopia. A hot topic in these cultural reforms are video games. Turning to the gods among game designers, they set out to determine THE golden standard. Per recommendation from Jaroslav The Wise, which game (other than your own) would that be?

While stroking my text-muted beard, I would have to recommend the game I have spent most time with. It is pretty old though: Frontier: Elite II.